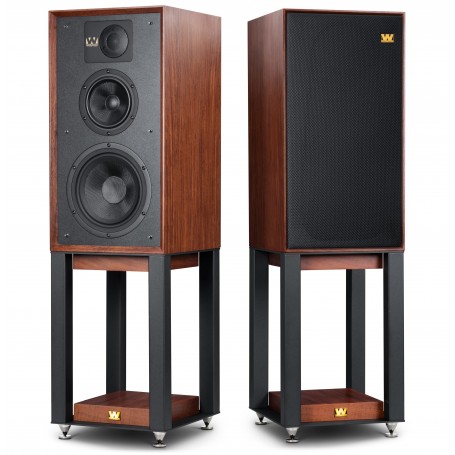 If you choose Bankwire payment you will get a 3% discount on your order.

Developed to celebrate Wharfedale's 85th anniversary, the Linton Heritage is a superb expression of the best yet most traditionalist in-house speaker know-how in the British audio industry. An acoustic box that, taking as a starting point a design that first saw the light more than half a century ago, has received profound and calculated improvements both in terms of aesthetics and background design and, of course, pure technology.

The objective? Offering an extremely honest and balanced sound presentation with a punchy point that allows it to meet the expectations of several generations of fans - not an easy thing - with the icing on the cake of a very competitive price.

Speaking of English sound in the middle of the era of studio-quality digital “Hi-Res” can be shocking, as most young fans - and many not so young - will take you back to the years when stereophonic audio was He is no more in consumer electronics. But the truth is that the aforementioned “English sound” contributed a lot at a time when high-quality media for recorded music began to see the light, contributing little by little but strongly to consolidate the very concept of sound reproduction in Alta Fidelity.

And what did it contribute? In essence, a slow, restrained presentation, very balanced and therefore with an extremely homogeneous subjective tonal curve throughout all audio frequencies, read between 20 and 20,000 Hz, all complemented by an analysis capacity in the one that the surgical never came before the naturalness of the music even though the dynamic component had a perceptible point of contention. Ultimately, the "English sound" was what would later be defined as "very musical", so it immediately gained the respect of the most demanding music lovers and, of course, lovers of sound perfection. At the market level, several were the representatives of this listening philosophy, mostly iconic brands to the point of continuing in the gap several decades after its founding.

One of them is the very veteran Wharfedale, founded by GA Briggs in 1932 and which almost 90 years later impresses with the vitality of its catalog, in which a very special corner has been reserved for updated versions of the most celebrated models of its fruitful history. . And so we come to the protagonist of this Blog: the Linton Heritage, a superb three-way monitor created to celebrate Wharfedale's 85th birthday that corrects and expands the original model in all aspects, both conceptual, technical and aesthetic.

As those who have tuned it tire of saying, the Linton Heritage represents Wharfedale's most iconic model in its long history as a manufacturer of high-quality domestic loudspeakers. In fact, we are dealing with a loudspeaker system that embodied the pioneering research of the British firm throughout the decades of the 60 ', 70' and 80 'of the last century, with a lineage that dates back to 1965 and that has always It has been manufactured respecting the principles of absolute quality and quality / price ratio that have governed the business history of the British firm.

Hence, the revamped Linton, developed by a team of engineers led by the prestigious Peter Comeau, superbly exemplifies this philosophy through a careful balance of high-end craftsmanship, sound naturalness and affordability in the context of a beautifully proportioned speaker that, Without giving up the essences of the original design, it does provide substantial modifications not only in technology and materials, but even in some elements of its basic concept. Thus, the Linton Heritage uses a bass-reflex bass loading system with two rear ports instead of the traditional acoustic suspension (i.e. hermetic enclosure) of the original model. What do you earn from that? From the outset, a greater extension of the bass response, which reaches a very remarkable 40 Hz -in a design of this class- and, almost more importantly, a substantial increase in sensitivity, than with 90 dB / W / m allows the renewed Linton to be comfortably attacked by a wide spectrum of electronics. On the other hand, the use of two compact bass-reflex ports instead of a larger one allows better control of the behavior of the lower part of the spectrum in “sensitive” rooms / locations and thus avoid interactions that could negatively affect the curve. subjective tonal. The opulent and robust floor stand specifically designed for the Linton Heritage also contributes substantially to this, which by placing the loudspeakers at their optimum emissive height ensures a natural spatial presentation. 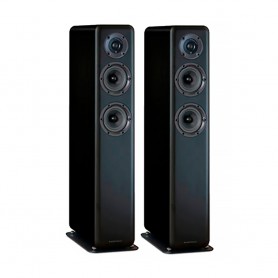 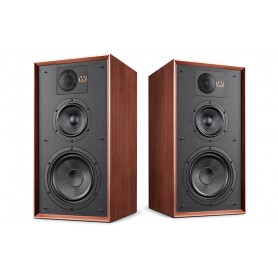 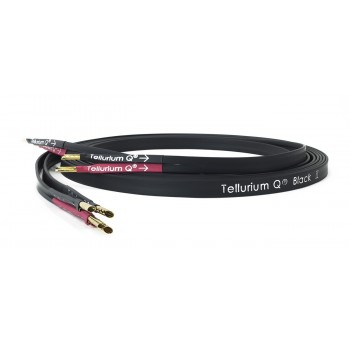